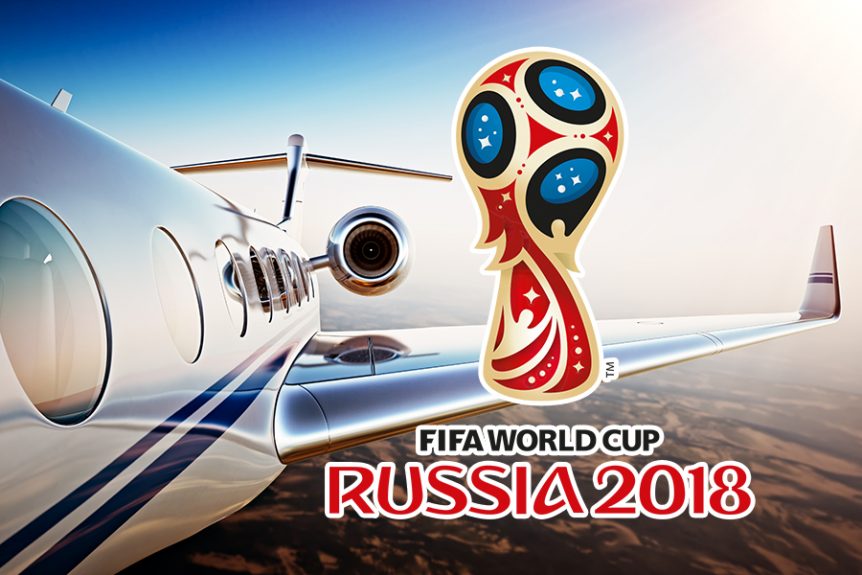 Flex Air Charters provides incredible World Cup Charters to visit Russia and its gorgeous towns and cities hosting the Fifa soccer event. Our professionals can arrange for a luxuriously tailored flight for you and your guests from any point across the globe. Jet charter aircraft from thousands of airports are ready to deliver you to the “World’s Most Viewed Sporting Event” of 2018.

Russia is not a stranger to hosting global events. From the 1980 Summer Olympic Games to the 2014 Winter Games it has played host to millions of people in a span of over 30 years for its sporting and cultural occasions. 2010 brought the exciting news of Russia being the host city of this tremendous event. You will have access to and can observe matches at 12 stadiums across 11 of the most beautiful and popular cities in Russia. Tickets began their sale on September 14th of last year and the general visa policy of Russia will not apply to World Cup participants and fans.

Our specialists are ready to discuss your World Cup travel plans and itinerary. Call Flex Air Charters at 1-888-722-0776 today to get started on your reservations.

World Cup Private Jet Charters, Where Are You Going?

Russia is known for its majestic beauty and incredible history. Being a huge continent subdivided into eleven time zones and two continents. While in the country during the 2018 Fifa World Cup, be sure to make your charter reservations to visit some of the most beautiful towns and cities in the surrounding areas. From the fine art collections at the Hermitage in what is known as Leningrad (St. Petersburg) to the historic brightly painted and gilded domes of the churches in Moscow, every city is steeped in an incredible heritage. Flex Air Charters can schedule overnight stays, ground transportation and tours for your convenience with our exclusive concierge service.

With Flex Air Charters’ impressive preferred partner network, we have the ability to send you into many different airports in the vicinity of these event cities. Simply let us know where you would like to go and we will build a customized jet charter itinerary that will allow you to truly experience every bit of the colorful culture Russia has to offer.

The birthplace of philosopher Immanuel Kant has its history rooted in its proximity to the beautiful Baltic Sea. While most other sites you may visit for some events may have traditional souvenir shops, Kaliningrad is known and celebrated for its market in the honey-colored stone of Amber and features a museum all about it.
Arena for events: Kaliningrad Stadium (Also known as the Arena Baltika)
Airport: Khrabrovo Airport is a dual-use airport used for scheduled services and military activity

Kazan is one of the oldest cities in Eastern Europe and will not only host the World Cup this year but also will host the 2019 WorldSkills Championship. Often called the “third capital of the Russia”, this town is known for its impressive architecture especially seen in its Soyembika Tower.
Arena for events: Kazan Arena
Airport: Kazan International Airport

Moscow is the capital city of Russia and home to what most people would consider the most iconic scenes of the entire country. From a time of Tsars and political revolution, Moscow has risen to be home to one of the highest concentrations of billionaires in the world. If that was not enough to get you to want to visit, then seeing the gorgeous red buildings of Red Square and the historical Kremlin Fort should be.
Arena for events: Luzhniki Stadium, Otkrytiye Arena (will be renamed Spartak Stadium for the event)
Airport 1: Moscow Vnukovo Airport is Russia’s 4th busiest airport
Airport 2: Moscow Domodedovo is the busiest airport in Russia and the former USSR.

As the 5th largest city in Russia as well as the epitome of software houses such as Intel Lab and Mera Networks, Nizhny is an up and coming University city. Here, you can visit the State Art Gallery, the Gorky Drama Theater and the Chkalov Staircase and many more of the country’s iconic sights.
Arena for events: Nizhny Novgorod Stadium
Airport: Strigino International Airport

Overlooking the scenic Don River and the Sea of Azov, this beautiful port city is best known for its historic and spiritually moving cathedrals and architecture. Some of these incredible sights include the Orthodox Cathedral of the Nativity of the Holy Virgin and the Assumption Cathedral.
Arena for events: Rostov Arena
Airport: Rostov-on-Don Airport

As an interesting port city along the famous Volga River, Samara, the 6th largest city of Russia is best known as a research and manufacturing hub for the country. Winters in this gorgeous city are often experienced by tourists wanting to see the amazing attractions of frozen river ice-skating and the Samara Space Museum.
Arena for events: Cosmos Arena (will be renamed Samra Arena for the event)
Airport: Kurumoch International Airport

Featuring a history of ancient Finno-Ugric culture and of course known as the birthplace of the famous Gerard Depardieu, Saransk has an underrated charm. This ancient capital of Mordovia is home to impressive buildings such as the House of Unions and the Museum of Mordovian culture.
Arena for events: Mordovia Arena
Airport: Saransk Airport

Sochi is known as the ‘Russian Riviera’ and was host to the Winter Olympics in 2014. This gorgeous city is considered the motherland of Russian tea and even has its own Parthenon. With a plethora of natural mineral springs, lush forests, and caves, it is no surprise that people flock to this natural city in droves to experience the scenery and luxury spas.
Arena for events: Fisht Olympic Stadium
Airport: Sochi International Airport is considered the “gateway To the Black Sea”

Famous for its fairytale Cathedrals, lighted waterways, and Royal Palaces, St. Petersburg could be the most iconic city to visit during your time in Russia. Visit the world-famous Amber room or do a walk-through of one of its major palaces, there are so many things to see and do in St. Petersburg you may have a hard time, making time.
Arena for events: Krestovsky Stadium (Also known as The Zenit Arena)
Airport: Pulkovo Airport

Known as the “hero city” for its part in the Battle of Stalingrad during the Second World War, Volgograd is one stop everyone should make in their travels to Russia. Visitors can see the museum-panorama “The Battle of Stalingrad”, Volgograd Memorial and Historical Museum, State Don Cossack Theater and so many more history-geared attractions.
Arena for events: Volgograd Arena
Airport: Volgograd International Airport

At the crossroads of Europe and Asia and the base of the Ural Mountains, Yekaterinburg is an incredible city and home to the Mamayev Hill Memorial, the tallest Mother Russia monument in the World.
Arena for events: Central Stadium (will be renamed Ekaterinburg Arena for the event)
Airport: Koltsovo Airport

We can customize any itinerary to fit your plans for this exciting event, call our World Cup charter agents right now 1-888-722-0776.

With our vast network of operators, owners, FBOs, and airports, no request is too large when it comes to creating a memorable and comfortable experience for your travel to the largest country in the World. You will have access to over 5,000 different aircraft, the option to have our concierge specialists arrange accommodations for your stay, a luxury car service and even catered meals or tours of the city you wish to stay in as well. Allow us to make your experience more than just a sporting event. Indulging in the amazing culture of Russia is not a spectator’s sport and our experience, dedication to safety and global connections make us the best choice in reserving your flight.

Air Charter Brokers and How they Serve to Help ... Set-Jetting: Unique travel trend takes film and...