For the aircraft owners on this list, private travel is more than just a regular trip on a day to day basis, it’s a lifestyle, an exclusive club to belong to. Having a private jet at your disposal by owning the jet or by leasing one is a luxury only those who need air travel often can indulge in. While Flex Air Charters can assist you in your own private jet rental, charter, lease, and purchase, it is highly unlikely that we can get one of these tycoons to share their incredible aircraft. But we can still share the specifications with you so you can start building your list of dream jet options. Here is a list of the most expensive private jets

At the base level, most private jets cost in the tens of thousands of dollars. However, with the means and money of some of these famous people, the possibilities in extravagant extras onboard their private aircraft are limitless and make their costs in the millions. Here are five of the most expensive private jets in the word:

The Bombardier Global 8000 may have made the list of the most expensive jets in the world, but it is much more affordable than the others you will read about here and is also available for purchase. Featuring one of the most comfortable and largest cabins in its class of aircraft, this luxury jet offers economical features as well including next-generation GE engines that deliver more efficiency with low fuel burn and low emissions. Offered at $ 66 million, the aircraft provides a more humble interior including a stateroom with a master bedroom, dining and conference area, and large windows so you can see the glorious sky around you.

Along with the more “modest” features, the aircraft also comes with advanced lighting technology that can be customized to the owner’s liking at any moment or while entertaining the other 16 passengers onboard. The range capability is also one to be mentioned as a benefit as well, with an unsurpassed Mach 0.90 high-speed cruise capability

Airbus is widely considered one of the leading private-jet manufacturers and they pulled out all the stops for this aircraft, the second most expensive model they create. Typical models run between $72 and $110 million, respectively. In what Airbus calls “unmatched comfort” the ACJ319 is considered a simpler model perfect for busy business owners including its former owner Vijay Mallya.

The aircraft can fit up to 8 passengers in what is known as the widest and tallest cabin of any business jet with intercontinental range. The wide-body version has additional space for a conference or dining room, but this model has plenty to offer. Fitted with two bathrooms, galley, bedroom, private bathroom, and versatile modules that allow for customizations for businesses or personal flyers, the price of the base model is set at $80 million, with the option for additionally customized interiors approximately $7 million more.

You had to know the president, himself, had to make our list of the world’s most expensive private jets. Even though Air Force One is a pretty awesome airplane, a president in the new age, especially one as rich as Donald Trump, has got to have options right? Donald’s 23 seat private jet is home to the latest electronic equipment including TVs on all the seats and a multiplex movie system with a library of 1,000 movies and 2,500 CDs. That’s no surprise though when you learn the previous owner was none other than Microsoft co-founder, Paul Allen.

Featuring gold accents such as seat buckles, sink, and faucets this luxury aircraft is very Trump. Decked out in the family’s logo, the glass cockpit and Rolls Royce RB211 turbofan engines also make this aircraft a luxury to fly for most pilots as well. The plane can reach speeds over 500 miles per hour and comes with safety features including a self-checking feature that alerts pilots to issues before they become serious as well as the engines that can keep the plane afloat for 16 hours. Trump pays a lavish price for these amenities and shells out about $10,800 for a one-hour flight including fuel.

The private version of Boeing‘s famous “Jumbo Jet” is the longest and second-largest airliner ever built. The base model may only cost $153 million, but the cost including some additional luxury amenities has been rumored to have reached up to $367 million, which probably seemed like a slight expense to its owner, Hong Kong real estate tycoon, Joseph Lau. The interiors of what has been called the “Dreamliner“, were designed by Greenpoint Technologies and they spared no expense.

Featuring two separate lounges, a stately dining area, personal gym, impressive conference room, and even a stateroom featuring its own lounge makes the Boeing 747-8 VIP one of a kind. It can hold up to 32 passengers in it’s 4,786 square feet of space and also offers such luxuries as a spiral staircase that connects both decks, vaulted ceilings and video displays on the walls. 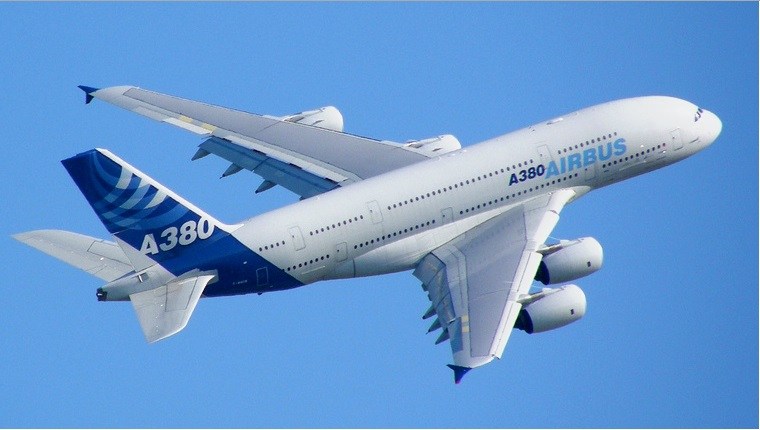 The world’s biggest private jet, the Airbus 380, is not only fit for a prince but was also owned by one. This jet holding its place as one of the most expensive private jets, after all of the customizations its owner, Saudi Prince Alwaleed bin Talal al-Saud has applied to it is around $500 million ($350 mil at base). The same model, less expensive of course, is also a part of both Singapore Airlines and Emirates fleets. The “kingdom in the sky” as it has been nicknamed, can accommodate up to 800 passengers.

The prince’s version features many amenities fit for a king (pun intended). It includes both a private staircase and an elevator that connects the three floors on board as well as plenty of space for occupants. Comfortable and lavish interiors cloak the family and VIP suites and a prayer room with electronic mats which automatically turn towards Mecca. The aircraft also has a concert hall featuring a grand stage and piano, a full-size boardroom, a Turkish bath and ample parking space for the prince’s Rolls Royce. As the former 5th richest man in the world, Prince Al-Waleed bin Talal has made the Airbus 380 an aircraft that can easily rival any of the most luxurious hotels on the planet, which is why it is # 5 on our list of the world’s most expensive private jets.

While We May Not Be Able to Offer Rides on These Five, We Can Still Offer You a Luxury Experience Like No Other, Call Flex Air Charters Today to Schedule Your Exclusive Private Jet Charter Today! 1-888-722-0776